A project of this size is nothing without its contributors. Countless musicians have been toiling away for about a year to give this project the polish a video game like "Secret of Mana" deserves. A year is a long time to focus on something. Lives were sometimes put on hold, many sacrifices were made, clashes have erupted, and gallons of blood, sweat and tears were poured into it. It has not been an easy ride to the finish line.

But it was not war, either. New friendships were forged that span the entire globe, inspiring works were created, and there has been just as much laughter and joy, with inside jokes to last forever.

Everyone did indeed cross the finish line. All the comrades were given an outstretched hand and dragged to the end. A simple "thanks" is not enough for those people. They deserve an award, or their names sung from the heavens, or maybe a vacation to an Island Paradise. But instead they will just get this thanks page, because I'm not omnipotent.

With the deepest sincerity in my soul, I truly cannot thank everyone enough who made this what it is today. Thank you for sticking with me. It was never originally intended to be what it has become: an incredible mark of history on the world of video game remixing. But I suppose that is what happens when you surround yourself with people as crazy as you all are.

Thank you to the Squaresoft team who created this legendary game. I only wish all of you were still here to see our love letter. 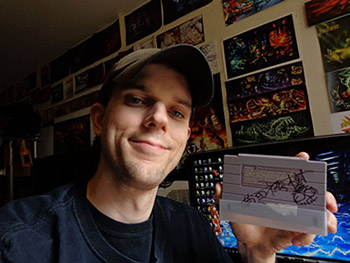 Thank you, Mana fans, for checking this out. It's the best possible tribute we could deliver, and we hope you'll agree that it does the game justice. And if you have not yet played the game? Thank you for the unbiased perspective. Maybe this will inspire you to give it a try.

'Til the next time history repeats,

"Secret of Mana" is owned in its entirety by Square Enix. This work is a fan tribute and celebration, and no infringement is intended.
"Spectrum of Mana" is not for profit. If you like this project, go buy and play "Secret of Mana" for the real deal!
Site design and development by Erik Peabody | Viking Guitar Productions